Joanna and Charles could not be cuter. Seriously. As I followed them with my second shooter Jess (we’d totally taken advantage of the opportunity for a girls’ weekend in Bar Harbor while we worked–more on that later) down the paths behind Jordan Pond House in Acadia Park, Joanna said she didn’t think she’d mind having paparazzi follow her, and as you can see, they’re both more than comfortable in front of the camera. But what really stood out to Jess and I as we spent the hours heading into sunset with Joanna and Charles was the quiet adoration they clearly have for each other, the way they looked at each other, the way they murmured little inside jokes to one another, teasing each other sweetly as we documented every word, glance, and touch. They are eloping in NYC, so I won’t be working with them on a wedding as I would with most of my clients, but I’m so glad I was able to be part of this special afternoon with them…and as you look through this small peek into that session, now you will be, too. 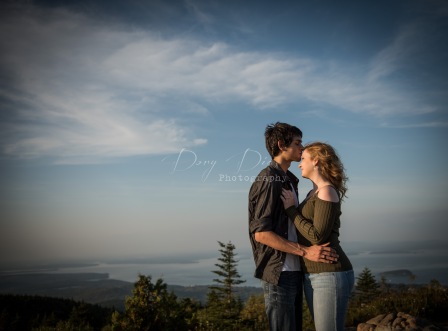